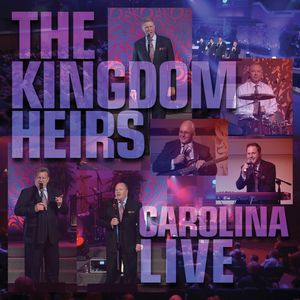 Carolina LIVE has arrived!
It has been over 7 years since the Kingdom Heirs have recorded a live DVD.  The last time that a live concert performance was recorded was in 2009 titled "Live At Dollywood".  With a wealth of great songs, 5 #1 songs, a string of top 5 songs and many crowd favorites since then, there's enough material to record a few more DVD's!

Coming off of the highly successful album "A New Look", featuring two Dove Award nominated songs The Chain Gang (written by Mark Bishop) and Pieces (written by Dennis Murphy), it was time to record another live performance DVD.

Carolina LIVE was recorded in Asheville, North Carolina at Trinity Baptist Church.  The Kingdom Heirs performed as only they can with a mixture of tremendous songs with some humor thrown in by Kreis and Andy.  Not to mention an instrumental featuring the reigning 8 time band of the year!
It was a fun night for all who attended the concert.  A lot of the songs from A New Look were featured as well as a few other songs from the popular Redbook Series.

The DVD is sure to be a favorite among your Kingdom Heirs collection!  You can purchase your copy NOW through our online store here as well as at any Kingdom Heirs performances at Dollywood or when the guys tour this winter season!  The Mp3 version is available for pre - order through iTunes as well as other music outlets at this link. https://clg.lnk.to/l7ibP  The Mp3 version is expected to release January 13th, 2017.

Carolina LIVE features songs: More Like Jesus, A New Look, Never Made A Promise, Gods Gonna Do More, Power In Those Bones, I'll Meet You In The Morning, Saving Us A Place In The Choir, I Feel Like Traveling On, Chain Gang, Pieces and I Can Tell You Now The Time.  12 great songs performed live!

Get your copy TODAY!  It's a must-have for your collection and just in time for Christmas!