Kingdom Heirs Top The Chart Once Again With Something Good Volume Two! 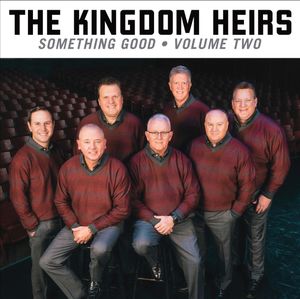 Arden, North Carolina (May 7, 2019) — The Kingdom Heirs's latest album, Something Good Volume Two, has debuted at #1 on Billboard's Southern Gospel chart and at #10 on the Top Christian chart.

On this album, The Kingdom Heirs recorded some of their favorite gospel songs, creating a collection of newly-recorded music from one of Southern Gospel’s top quartets. It’s a joyful reminder of all the Lord has done with songs retelling classic Bible stories and others about our own experiences with Christ in everyday life.

"A big thank you to The Kingdom Heirs' fans for buying the new Something Good Volume Two project. We are excited that it’s our second Billboard #1," says The Kingdom Heirs' Kreis French. "The group did a great job, and special thanks to lead singer Arthur Rice for all his hard work."

The album starts with, “What A Beautiful Day,” a song about longing for the day Christ returns, that stays true to the well-known Happy Goodman Family version.

On the current radio single “The Lovely Name Of Jesus,” Rice takes the lead with Jerry Martin, Loren Harris, and Jeff Chapman, joining him on the chorus. Rice says this song, written by Squire Parsons and originally recorded by The Kingsmen, has energy and sincerity with a message that simply the mention of Jesus can calm tumultuous situations.

Other songs include, “It’s Gonna Be A Good Day,” “That’s How I Know,” “The Love Of God,” “Something To Shout About,” “Run On,” “Thus Saith The Lord” and “When We Sing Around The Eternal Throne.”

The album ends on a joyful high note with “Joshua Fit The Battle of Jericho,” a lively, upbeat instrumental with the award-winning Kingdom Heirs band of Andy Stringfield on piano, Dennis Murphy on drums and French on bass joined by a big band brass section.