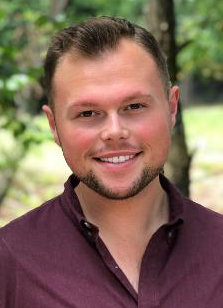 The Kingdom Heirs are proud to introduce their new tenor, Mr. Jacob Ellison. He will make his debut with the group on Friday, March 12, 2021 during Dollywood’s Season Passholder Preview Day. Jacob is 24 years old and is from Candler, NC. He is currently enrolled at Lee University and is scheduled to graduate in May. He has been a part of the university’s world renowned choral group The Voices of Lee, and has also traveled with the Edwards Family, Wes & Karyn Green and The Webb Family.

"We are very excited to start our new season at Dollywood with Jacob. He is a very talented individual who loves the Lord," states Kreis French.

Jacob Ellison stated, "It is such an honor to be part of a group that has had as great of an impact on Southern Gospel music as the Kingdom Heirs. The kindness shown to me by the members of this group makes me feel so honored to do ministry with them."

The Kingdom Heirs are looking forward to starting their 36th year at Dollywood and hope to see many of you there.