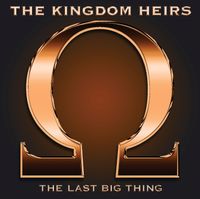 Arden, NC  (October 11, 2017) – The Kingdom Heirs have garnered their first No.1 debut on Billboard Music’s top Southern Gospel Album chart with their new release, The Last Big Thing. In addition, the album will appear at the No.8 position on Billboard’s Current Contemporary Christian chart as well as the No.12 position on the Christian/Gospel Music album chart for Oct. 10th, 2017. The album released Sept 29th on Sonlite Records a division of Crossroads Entertainment and Marketing. The Kingdom Heirs and Sonlite marked the occasion of the release with a celebratory gathering and performance at this year’s National Quartet Convention in Pigeon Forge, Tennessee

Lead singer Arthur Rice states, “Anytime you record a new album, you hope everyone loves it as much as you do. From its initial success and chart debut, I think everyone is loving it too! Our prayer is that every song encourages you as it has us.”

Chris White, founder of Sonlite Records shares. “This is new territory for us. We’ve been the label home for The Kingdom Heirs for more than 30 years now, and we have never had an album debut on multiple Christian Music charts in the same week. This proves that people want quality Christian music, and they don’t care what the genre is.”

The Kingdom Heirs have been the resident Gospel performing group for Dollywood in Pigeon Forge, TN  for more than 32 years performing before millions of people. With ten No. 1 songs on the Singing News Magazine monthly charts, multiple Singing News fan awards and Dove Award nominations, the future keeps getting brighter for this talented band.