The Kingdom Heirs’ broad talents shine on "Everything In Between"

The Kingdom Heirs’ broad talents shine on "Everything In Between". 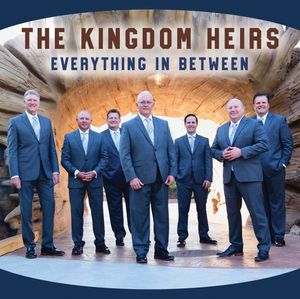 Sonlite Records/Crossroads Music Group:  Arden, North Carolina (August 2, 2019)
The Kingdom Heirs are illustrating why they’ve been noted as one of the top quartets in Southern Gospel music with their latest album, Everything In Between, featuring full quartet tunes, a cappella hymns, and lively instrumentals. Everything In Between is now available for pre-order.

Due out from Sonlite Records on September 27, Everything In Between allows The Kingdom Heirs’ broad talents to shine. Each style lifts up praise to the Lord for all He’s done for us on Earth.

The album begins with “Just Drink The Water,” a new song from the pens of Lee Black, Gina Boe, and Jerry Salley about wanting to be a witness of Christ’s love and spreading His message to as many people as possible. Then, The Kingdom Heirs invite all to “Come To The Well” in an upbeat song about all being welcome at the healing stream.

The title track follows, reminding that no matter what happens in life, Jesus is the first, last and everything in between, something the Bible will tell us if we turn to it. With an upbeat, country feel, this song features bass vocalist Jeff Chapman on the verses with the group joining on the chorus and embodies the heart of Southern Gospel traditions.

“That water-walking savior who can calm a raging sea
Who rules this mighty universe and still has time for me
My doctor and my lawyer, any day my coming King,
Jesus is the first, the last and everything in between.”

The soulful “I Have Overcome” features the full group and band, ending with power and conviction as it tells of rejoicing how God has already faced any battles we will on earth.

The Kingdom Heirs’ instrumental work shines on their rendition of “Sweet By And By,” a classic hymn immediately recognizable with the joyful piano of Andy Stringfield. The album features two other instrumentals. “Crying In The Chapel” has a swing feel of the Elvis Presley classic and “He Set Me Free” is a true old fashioned country church hymn put to a Southern Gospel feel.

“Holy, Holy Is What The Angels Sing,” sung a cappella, is an old church hymn that tells of the joy salvation will bring and what it will be like to join the choir of angels. The Kingdom Heirs’ voices and harmonies shine as they share the emotion that will come upon reaching heaven.

Other songs include the a cappella “Nothin’s Gonna Keep Me Down” and “Ready For Glory” and “I’ll Never Get Over The Blood That I’m Under,” featuring the full group.

Everything In Between closes with “High On Zion’s Mountain” a powerful song penned by one of the group's favorite writers, Dianne Wilkinson. With grand music, it tells of the glorious day when we reach Heaven and the beauty that will be found there.

With their vocal and instrumental abilities, The Kingdom Heirs praise and worship the Lord with each song on Everything In Between. Whether it’s a powerful song with the full group, a moving instrumental or a smooth a cappella tune, this album has something for each listener looking to lift up the Lord and His message.

Pre-order the digital copy of Everything In Between HERE.  For the physical CD, you can Pre-order it HERE.

Thanks for supporting the Kingdom Heirs throughout the years!